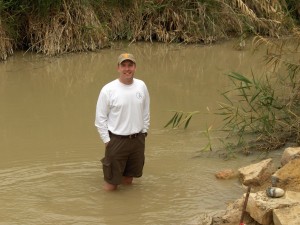 When was the last time you really, truly felt loved and appreciated? Like you were special? That someone, anyone, really delighted in . . . well . . . you?

The ancient Israelites wrestled with these questions. They felt forgotten. Abandoned. Lost and desperate. Isaiah 63:19 gives a hint of this, at which place their emotions spill forth as they try to get God’s attention: “We have become like those over whom you have never ruled, like those who are not called by your name.” Indeed, no small wonder in the very next verse, Isaiah 64:1, they plead: “Oh that you would rend the heavens and come down. . . .”

Fast forward 700 years, at which time the longings of the ancients was to be realized; promises from long ago fulfilled. Consider the account as recorded by Mark in Mark 1:4-11:

In those days Jesus came from Nazareth of Galilee and was baptized by John in the Jordan. And when he came up out of the water, immediately he saw the heavens being torn open and the Spirit descending on him like a dove. And a voice came from heaven, “You are my beloved Son; with you I am well pleased.”

Several observations must be made, not the least of which is that the man called John, historically known as John the Baptist, was boldly inviting people to come to the Jordan River to experience a baptism of repentance. This was common in those days. People whose hearts were heavy with shame and guilt would baptize themselves as a tangible symbol of personal cleansing. But John took it a step further, prophetically calling the people to him and promising the coming of one who would cleanse them with the Holy Spirit.

And this one came—Jesus, from of all places Nazareth, which to that point had never even been recorded in the atlases of the ages. It was a tiny village off the beaten path of which few would have ever spoken. From this insignificant place this Jesus arrives at the Jordan, slips into the water, and joins the multitudes in being baptized. Note the lack of pomp and circumstance. Note the humility and the disinterest in fanfare. And note, too, the desire Jesus had to associate with and identify with the spiritually broken and hungry. As the utterly righteous Son of God (Mark 1:1) Jesus did not need to be baptized. He certainly did not need cleansing or to repent. But he wanted to associate with those who did. People just like you and me. Second Corinthians 5:21 says, “For our sake he made him to be sin who knew no sin, so that in him we might become the righteousness of God.”

Coming out of the water something extraordinary happened. A desire was met. That ancient longing expressed in Isaiah 64:1 was realized. The heavens opened up and God came down in both voice and physical presence (note the Holy Spirit descending like a dove). God is on the move. And the words of the voice from heaven? Very important words they were. The first statement, “You are my beloved Son,” is straight from Psalm 2:7, which reads, “I will tell of the decree: The LORD said to me, ‘You are my Son; today I have begotten you.'” These are King David’s words regarding the Lord’s call on his own life, and the backdrop is that of a Royal Psalm. Kingship is being spoken of here, and not just any kingship, but a kingship that is ordained and established by the Eternal God of Heaven and Earth. So, when the voice from heaven in Mark 1 uses the same language of Jesus, we find that Jesus is being introduced as the greater King David, he is royalty who has arrived on the scene in the middle of the wilderness.

The second statement from heaven reads, “with you I am well pleased.” This too is important and this too reflects the ancient Scriptures, but rather than having a royal background these words have a slavery background. Isaiah 42:1 begins a section in the Book of Isaiah that highlights the Lord’s Chosen Servant, or Messiah. It is God reflecting on his provision for mankind, and reads, “Behold, my servant, whom I uphold, my chosen, in whom my soul delights; I have put my Spirit upon him; he will bring forth justice to the nations.” One cannot miss the coming together of the Eternal God’s delight and pleasure (“with you I am well pleased”) and the “Spirit” symbolized by the dove that descends “upon” Jesus.

And herein is the importance of these things. Jesus appears from humble earthly origins, much like us, not particularly impressive and very modest. He slips up alongside of us and chooses to experience our pain and spiritual hunger, which is why he willingly was baptized though he personally did not need to be. He is, in fact, the promised King of the Ages, who chooses to engage you and me as a humble servant, all of which is authenticated by God himself with a sign from Heaven. And the most precious part of it all? When we choose to associate with this Servant-King, choosing to be “in Christ Jesus” (cp. Romans 8:1), then it will be said of us by God, “You are my beloved; with you I am well pleased.” Galatians 3:26 amplifies this, saying, “for in Christ Jesus you are all sons of God, through faith.”

And so, finally, we experience the love and pleasure of One whose love and delight cannot be matched by even the best that this world has to offer.