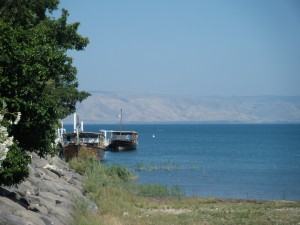 The first word, “now,” really ought to be “and,” as it is in the original Greek, which only amplifies the intimate connection this passage has with the preceding one. For all of their association with Jesus, what unfold on the boat is a monstrous display of naiveté and callousness toward Jesus and the message he is representing. In the end, therefore, the difference between the disciples and the Pharisees with whom Jesus had an uncomfortable confrontation as told in the previous passage is very small.

Jesus wishes for the disciples to not be caught up in the leaven—that is to say, the evil, permeating influence—of the Pharisees and their ilk. Referencing leaven was common, being a modest household staple that became an everyday metaphor for (negative) particles that transform whatever it touches. The grammar of Mark 8:15 implies that Jesus was repeatedly driving this warning home. He was pleading with his friends to stay clear of the unbelief that characterized the religious elite.

The disciples, however, dismissed this, proving the old adage that one plus one at times equals zero. One response to Jesus’ exhortation was to lamely rummage through their stuff to see if there is any bread. “Jesus must be hungry, he’s talking about leaven.” How ignorant of these men to miss Jesus’ point, particularly just on the heels of the emotional and frustrating back and forth between Jesus and the Pharisees. The other response suggests that if in fact Jesus were talking about bread, and their lack of it, they had forgotten that Jesus is the one who multiplies bread and feeds thousands. On both thoughts they fail. Jesus was not talking about real bread but the unbelief of the Pharisee, and if he were talking about bread surely one would remember that providing for bread is something he can easily do.

The disciples’ response leads Jesus to come down rather hard on the guys; one of the few times we really get a sense of such. He fires off eight questions at the guys, questions designed to convict them of their hardness and lack of focus. Ultimately, he seems to be asking them why in the world they are even in the boat with him. Is it that they just want to identify with a popular figure? Is it that they need something from him? Is it societal pressure?

Or could it be something more. John 6:35 and following reminds us that Jesus is the Bread of Life, the Son of God who seeks to raise men up to new life. Oh, that the disciples would be in the boat with Jesus (implying total abandon to him) because he is God in the Flesh who commands belief and takes care of his own.

But, at least at that moment, the disciples miss all of this, and by so doing make themselves not much more capable than the Pharisees. Which begs an important question for you who are interested in hanging out with Jesus (that you’re even reading this blog suggests as much): why are you in the boat?

“Write This Down” is a summary of select teaching moments offered by Pastor Matthew. The preceding material is from the message “Beware of the Leaven,” part five of the sermon series entitled, “Signs,” a study through the Gospel of Mark, presented on the weekend of February 23, 2014, at Bethel Church.