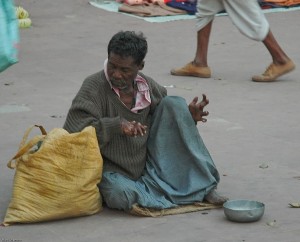 In a simple but powerful and emotional moment Jesus not only sends a shot across the bow of a stoic and stuck religious establishment, but summarizes for all of humanity the full nature of his mission. Consider the passage as revealed by Mark in the historical narrative that bears his name:

And a leper came to him, imploring him, and kneeling said to him, “If you will, you can make me clean.” Moved with pity, he stretched out his hand and touched him and said to him, “I will; be clean.” And immediately the leprosy left him, and he was made clean. And Jesus sternly charged him and sent him away at once, and said to him, “See that you say nothing to anyone, but go, show yourself to the priest and offer for your cleansing what Moses commanded, for a proof to them.” But he went out and began to talk freely about it, and to spread the news, so that Jesus could no longer openly enter a town, but was out in desolate places, and people were coming to him from every quarter. (Mark 1:40-45 ESV).

It begins with the approach of a leper—a person whose disease was so grotesque that he was essentially a walking dead man. The leper comes to Jesus, falls before him, and begs Jesus to cleanse him. Jesus’ response is telling. “Moved with pity” suggests that deep in his own gut, literally, within his spleen, Jesus felt emotion of such magnitude for which words were completely inadequate. My suspicion is Jesus was overwhelmed with the man’s boldness, for the man was taking a huge risk to step in front of a crowd and approach a luminary like Jesus. Moreover, I suspect Jesus was overwhelmed with the gravity of the man’s condition. Leprosy was not only a virtual death sentence both physically and culturally, but was perhaps more than any other condition a raw symbol of humanity’s depravity and brokenness. Jesus’ grief regarding the plight of humanity was very deep.

Damning cultural and religious conventions, Jesus reached out and touched the leper. One can almost hear the gasps from among the crowd of onlookers. Jesus words “I will; be clean,” not only present the willingness of Jesus to deal with the matter right then and there, but the finality of Jesus’ work: Jesus commanded cleansing that was immediate and permanent (the word “clean” is an aorist imperative).

What gets a bit trickier is the next aspect of this whole moment with the leper. Jesus, according to the text, “sternly charged him and sent him away.” Conventional thinking has been that Jesus became somewhat put out with the one-time-leper because he anticipated the man’s disobedience to Jesus’ string of commands found in verse 44. This is possible, I suppose; and certainly Jesus would have reason to be frustrated if the man’s testimony made it more difficult for Jesus to come and go as he desired. However, I tend to think that Jesus’s demeanor here was not directed at the man per se, but was more or less a continuation of his emotional response recorded in Mark 1:41. I believe Jesus was groaning within (which reflects the meaning of the word in the ancient language; see John 11:33 and 11:38 for other uses of this word) because of the messy reality of life which no doubt included the one-time-leper’s pending disobedience, but more greatly the total condition of mankind’s brokenness and the scrambling and shame and sorrow that echoes that brokenness.

In effect, Jesus is put out because of the magnitude of sin and its impact on creation.

At this point it would be helpful to offer some practical reflections. First, Jesus sending the man to the priest would fulfill the requirements of Leviticus 14:2 and following. Should this particular man do this very thing, then it would ideally captivate the priestly class, causing them to explore more the person and message of Jesus. It should be noted that prior to this there were only two cases of a leper’s healing in the Scriptures. One was Moses’ sister Miriam found in Numbers 12, and the other was the Syrian general Naaman, whose story is found in 2 Kings 5. In both cases Moses and Elisha (who are proxies of the Law and the Prophets, respectively) initiated the healings through either petition or direction. That Jesus with a single touch and a verbal command could totally heal the leper in Mark 1 suggests he is greater than Moses and Elisha, thereby greater than and/or a fulfillment of the Law and the Prophets. The priests should take firm note of this!

A second reflection centers on the request of the man to withhold his story until the time with the priest had passed. It should be said here that there is a time to simply be silent (cp. Ecclesiastes 3:7). Sometimes gospel clarity means verbal restraint, for in one’s zeal one can sometimes do more damage to the greater cause of the good news regarding Jesus. This is often borne out among families of those just born again. In his or her zeal to have parents come to know Jesus, wounding words and painful expectations can cloud the greater word of redemption found in Christ and his work. If nothing else, this awkward response by the one-time-leper serves to give us pause to seek the Lord’s wisdom on “a time to keep silence, and a time to speak” (Ecc. 3:7).

Lastly, we note that just as Jesus can completely rid a man of society’s most dreaded physical disease, which is itself a symbol of soul-sickness and depravity, we can expect Jesus to completely heal our souls. This begs an important question: what is your leprosy? Lay it out before the Lord. What is the most horrid thing within your soul? What is your greatest shame, your greatest regret, your deepest fear, your most common struggle? Lay these out before the Lord and let him heal you. He has the authority and power, as demonstrated by his own death and resurrection. As the Scriptures declare, “If we confess our sins, he is faithful and just to forgive us our sins and to cleanse us from all unrighteousness” (1 John 1:9). Over  you—even you—he says boldy, “I will; be clean.”

“Write This Down” is a summary of select teaching moments offered by Pastor Matthew. The preceding summary is from the message “Moved with Pity,” the ninth message from the series entitled “Jesus, God’s Beloved Son,” a study through the Gospel of Mark, presented on the weekend of February 3, 2013, at Bethel Church.