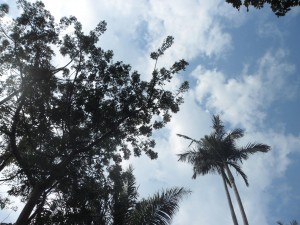 Arriving at Bethsaida proved pivotal for the disciples and Jesus. We get this sense of things reading Mark 8:22 and following. Take it in below:

And they came to Bethsaida. And some people brought to him a blind man and begged him to touch him. And he took the blind man by the hand and led him out of the village, and when he had spit on his eyes and laid his hands on him, he asked him, “Do you see anything?” And he looked up and said, “I see people, but they look like trees, walking.” Then Jesus laid his hands on his eyes again; and he opened his eyes, his sight was restored, and he saw everything clearly. And he sent him to his home, saying, “Do not even enter the village.” (Mark 8:22-26, ESV)

Tension was heavy in the air. The back and forth between Jesus and the disciples as they had crossed the lake was uncomfortable at best. The simple fact was that in all of his interaction with the disciples as recorded in the historical accounts, this was the most tense. He scolded them for their hardness of heart, strongly implying that their spirit was not much different than the Pharisees. All of this is to say, by the time they arrived at Bethsaida, they were all undoubtedly ready to get out of the boat and find a bit of margin from one another. The problem, however, was the location. Bethsaida, according to John 1:44, was the hometown to Simon Peter and Andrew and Philip; perhaps others. According to Matthew 11, Bethsaida is also the community that, along with a couple of other towns, is perceived as being worse than Sodom and Gomorrah because of its overt rejection of Jesus’ message. It is quite likely, therefore, that when the disciples stepped out of the boat they were bombarded with sharp words from one-time childhood friends. “You’re still with that kook?” they may have asked the disciples, referring to their association with Jesus. And for the disciples, it would have been easy to quietly ponder, “If you only knew the real story, the real me, and the real Jesus.” Momentary annoyance aside, they were proud to be with Jesus.

Meanwhile, Jesus is approached by a blind man and his friends; the friends seeking help from Jesus for the blind man. Probably because of Jesus’ condemnation of Bethsaida for its rejection of him, he pulls the blind man outside of the confines of the town, followed, we assume, by his disciples and the blind man’s friends. The miracle that Jesus performs is most unusual, the only one needing “two parts” and Mark is the only one who records this moment in time.

And unusual it is. After touching the man’s eyes and stepping back slightly, Jesus asks the man what he sees. The once-blind declares that he sees men who look like trees walking around (reminding us, by the way, that the blind man was not blind at birth, but lost his sight later). Can you see the disciples standing just behind Jesus? This man has just referred to them as trees walking around. I cannot help but wonder if they thought to themselves, “Is that the best Jesus can do? And what’s with this man? Does he not know who we are?” I also cannot help but wonder if, perceiving they might be thinking as much, Jesus turned slightly and looked at them as if to say, “Right . . . that is the question I have been asking about you now for this whole day.”

With that Jesus touches the man’s eyes again, and the man then can see “clearly.” This word is vital to the passage, for it is very rare in the Greek literature, and suggests that the man can not only see quite far away, but also perceives in his mind something deep. Literally, in the ancient language, it means “to see the radiance” or “to see the majesty.” One wonders if Mark, in putting this passage together, intended for the once-blind man whose life has just been transformed by Jesus to make an enigmatic statement about Jesus, the Radiant One.

And if that is so, perhaps the disciples might take the cue, that the one they have been looking at for some time, is the one they ought to . . . see.

“Write This Down” is a summary of select teaching moments offered by Pastor Matthew. The preceding material is from the message “To See Clearly,” part six of the sermon series entitled, “Signs,” a study through the Gospel of Mark, presented on the weekend of March 2, 2014, at Bethel Church.