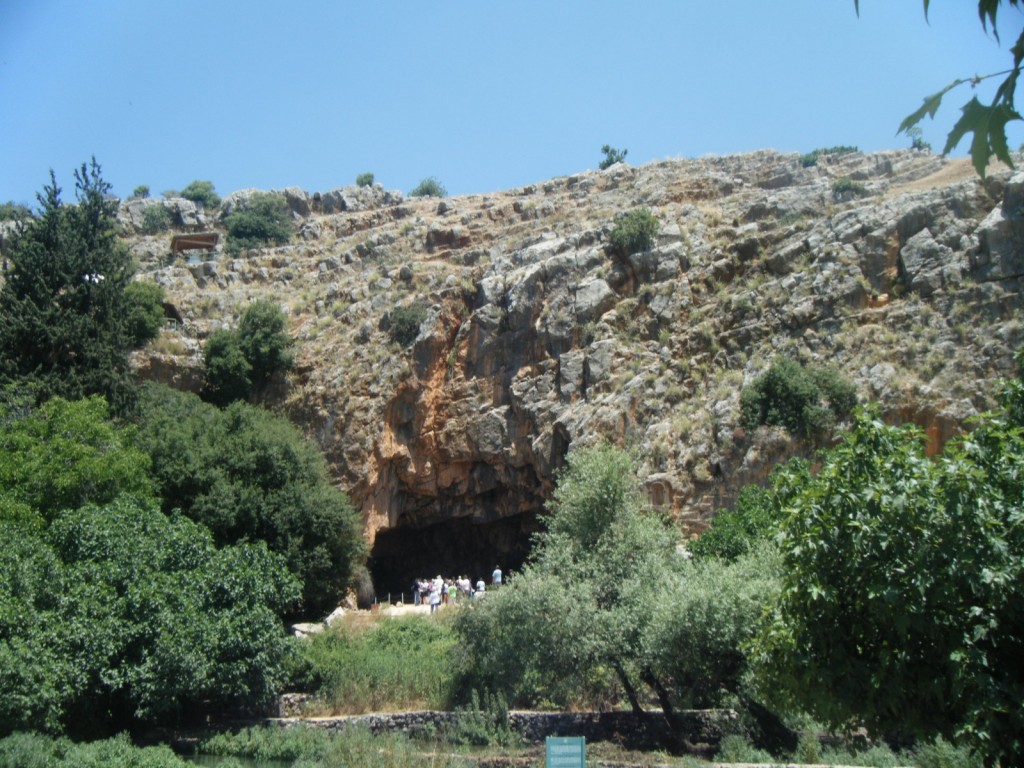 Munus Triplex and the Crucifixion

The geography was made for the moment. Caesarea Philippi, located 25 miles north of the Sea of Galilee, was a place of unusual significance. No mere spot on the road, this city had been built up by Philip II, the son of Herod the Great. In honor of Caesar Augustus he called it Caesarea, and to distinguish it from another city of that name he added Philippi—Caesarea Philippi: the city named for two kings.

But it was more than a civic project for a two-bit regional ruler. It was also a sacred place for the pagans living in the region and traveling along the major trade highway running through the area. Long before Philip II put his eyes there, the place was known as Panias, in honor of the Greek deity Pan, the god of chaos and wild nature. Carved into the limestone outcropping that caught the random traveler’s attention were shrines in which were placed altars and images of Pan. Pagan priests ran amok, as did many spiritually hungry people putting forward their offerings to this Greek god.

In the midst of these things walked Jesus and his disciples, making their way toward mighty Mount Hermon, which loomed large over the entire landscape.

And Jesus went on with his disciples to the villages of Caesarea Philippi. And on the way he asked his disciples, “Who do people say that I am?” And they told him, “John the Baptist; and others say, Elijah; and others, one of the prophets.” And he asked them, “But who do you say that I am?” Peter answered him, “You are the Christ.” And he strictly charged them to tell no one about him. (Mark 8:27-30)

It seems reasonable that Jesus would ask. After all, the names of prominent characters filled the air: Caesar, Philip, and Pan. “Who do people say I am?” Jesus asks (repeatedly, according to the Greek grammar). And the response of the disciples is telling. Jesus’ reputation evokes for the masses the Hebrew prophets of old, men like Elijah and Jeremiah (cp. Matthew 16:14).

Perhaps it was the fact that they were standing in the city of kings, watching priests scurry about, and talking of prophets, but when Jesus asked the next question, “And who do you say that I am?” Peter boldly leaned forward and gave a pithy response: You are the Messiah!

Yet what does that have to do with prophets, priests and kings? Indeed, it has everything to do with these, for the Hebrew word “Messiah,” which is equivalent to the Greek word “Christ,” means “the Anointed One,” and per ancient Jewish thinking the Anointed One of God would be the one who was the culmination of the prophets and priests and kings of Israel. If the prophets and the priests and the kings were each three streams of authority raging across the landscape of Hebrew history and thought, the Messiah is the mighty river into which these streams run. Traditionally, this dynamic is called the munus triplex, or the three-fold office, wherein prophet, priest, and king come together as one. Whoever the Messiah would be, he was the answer to the dreams of an entire civilization of God-fearing people, and according to Peter his name is Jesus.

Jesus readily affirmed Peter’s declaration, but charged his disciples to tell know one. He knew his crucifixion would publically affirm the reality of Jesus’ role as Messiah, and that moment had not yet arrived. For now, it was good enough for his disciples to bathe themselves in the truth that Jesus was the Messiah, and as such, the bearer of the munus triplex. Jesus was content to keep these things private.

This moment with Jesus and his disciples begs for some reflection. First, being that Jesus is the Messiah, he is, therefore, the ultimate prophet—someone whose word must be heeded (you might see Deuteronomy 18:15 for more insight). Do you heed the word of Jesus, that is, the Word of God? Do you pick and choose what is convenient, downplay it or dismiss it, or otherwise pretend it has no value? If you ever pronounce the titular phrase “Jesus Christ,” then you are affirming, among many things, that he is The Prophet, and being that he is, his word demands your focused attention.

Secondly, being that Jesus is the Messiah, he is, therefore, the ultimate priest who stands in the gap spilling blood between broken sinners and a holy God. Leviticus 4, in the Old Testament, teaches as much, and sets the stage for the greater priest who would shed his own blood, but not by standing in the gap but by hanging on a cross. Do you believe Jesus Christ is the Great High Priest who shed his own blood so you can be declared righteous in the eyes of Almighty? Now is the time to trust him. Declare it so!

Lastly, being that Jesus if the Messiah, he is, therefore, the ultimate king—someone who demands your complete and total obedience and allegiance. The book of 1 Samuel tells of King David being anointed, and 2 Samuel finds God declaring that David would have one of his offspring ruling forever and ever (see 2 Sam. 7:12). That offspring is Jesus Christ (see Matthew 1). Every time you speak that name you are also affirming that he is your King and that you are loyal to him forever. Do you live your life that way? Is this loyalty evidenced in your relationships, your private moments, your finances, your time, your values, your dreams, and so forth?

Take some time right now and ask yourself, who do you say that Jesus is? What are you going to do about your answer?

But how could you live and have no story to tell? —Fyodor Dostoevsky

Our whole life as a leader is to bear witness to God’s love for the world. (Peter Scazzero)