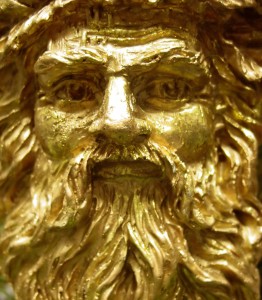 Though routine the soldiers’ work on top of the hill attracted onlookers. They labored away, planting stakes and laying out the timbers that would form the stands for some rough crosses. The sun was devouring the morning fog, and from that hill one could see the beginning of a very busy Friday in Jerusalem.

Across the city two other soldiers were approaching the cell of the rebel whose day had come. It was routine for these soldiers too, but with Jerusalem swollen for Passover, tensions were high and the soldiers weary.

At the cell one of the soldiers unlocked the heavy door. As it opened it creaked just enough to startle the prisoner sitting timidly in the damp room’s corner. The man looked tired, and his body was swollen from beatings. His cell was foul, and the buzz of those ever-present flies was ringing in his frightened ears. For him, going to that hill across the city would be more of a blessing than a curse.

But it was not to be. Jerking him up by each arm, the soldiers pushed him against the wall. “You are being released, Barabbas!” declared one. “The governor is crucifying some Galilean in your place. What a shame! Follow us and keep quiet!” The soldiers led Barabbas to the prison’s main gate and hurled him into the street where he picked himself up and walked away a free man. With his head spinning, he stumbled aimlessly around the city hunting for something to eat and contemplating what to do next.

Soon Barabbas began to hear a raucous commotion from near the temple, where he saw a large crowd lining the street. From around the corner soldiers appeared, with bright red capes flowing behind them, and following them on his hands and knees was the Galilean on whose back was a rugged, wooden crossbeam.

One wonders what was Barabbas’ response. Perhaps his eyes welled with tears. Watching the ragged man crawl down the dusty road, Barabbas knew that he himself should have been burdened with that crossbeam. Weeping, Barabbas thanked the God of Israel for his underserved freedom.

Or, perhaps Barabbas snickered as he watched that wretched man struggling with his load. The Galilean probably deserved it anyway. With that, Barabbas turned and walked away. Still hungry and worried about his next step, he had better things to do than be concerned about the death of some foolish carpenter.

What would your response be? You and I have so much for which to be grateful. [Tweet “Yet, in Jesus Christ we have something that far surpasses the most meaningful earthly benefits.”] Like Barabbas, we should have carried that rugged crossbeam; yet Christ carried it for us, releasing us from sin’s prison. It is an amazing thing what that Galilean carpenter did. Truly you and I should be more thankful for Him than anything else in our lives.