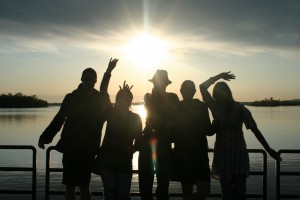 While a student at Dallas Seminary a good friend of mine and I went to an IHOP to study for a Hebrew exam. My friend seemed unusually anxious, tender and, admittedly, a bit awkward. At some point during the evening I finally asked him if he was okay. He looked around cautiously, then in a whisper said to me, “I need to tell you something I have never told anyone else before.”

“I’m gay.” With that, I stood up from the table, invited him to stand up, and gave him and a hug and told him he was my brother and that I loved him.

I don’t think that heterosexuals like me can even begin to fathom the intense anxiety embedded within the heart of a gay individual, particularly if he or she is still in the process of attempting to be public about his or her inner-world. Being sensitive about such things, while at the same time affirming and embracing values that are higher than whatever brokenness and messiness we have, whether gay or straight, is tough.

Ironies Christians Must Wrestle With

Here are some ironies that I see regarding homosexuality and Christianity in general. First, I am blown away by the number of couples who claim to be Christian who are living together outside of a sanctioned marriage covenant, are sexually active, etc., and yet willing to denounce homosexual marriage as inappropriate and sinful.

The church seems so concerned about gay marriage, but I wonder where we were when “no-fault” divorces were first redefining our culture.

What if all the money and manpower available to Chick-Fil-A on August 1, 2012 were directed by Chrisitans toward eradicating the water crisis in Africa or poverty in the inner-cities of America?

When in general terms gays and lesbians find genuine love and care from within their own community and not from followers of Christ, then perhaps their claim we are homophobic is right on.

Values We Must Own, Whether Gay or Straight

Hebrews 12:15-16 puts forward a remarkable statement that on the surface is confusing: See to it . . . that no one is sexually immoral or unholy like Esau, who sold his birthright for a single meal. The confusion comes because in the Old Testament story of Esau selling his birthright for a bowl of soup (see Genesis 25:29-34) there is not one reference to sexual immorality. What is it that the writer of Hebrews is saying?

He is laying out a principle of life, one that is applicable to the heterosexual person and homosexual person, and it is this: Esau was born hungry and needed food for survival, but that did not necessitate Esau letting his hunger define him and cause him to set aside God’s very best (in his case, the all-important blessing of birthright) for lesser things (a bowl of stew). From this insight consider the following reflections:

First, being born a certain way, whether real or perceived, does not justify forfeiting God’s best for our lives. Esau was hungry, understandably so, but to throw aside what God had designed for his life due to his hunger was completely inappropriate. The assumption that one has a disposition toward certain behavior or beliefs does not justify settling for something that God has not prescribed. As it relates to sex and sexuality, this means that settling for something less than God’s prescription of a one-man/one-woman covenant relationship, as ordained by God in Genesis 1 and 2 and affirmed by Jesus in Matthew 19, is sin, whether one is gay or straight.

Secondly, we must discern how to satisfy our real or perceived dispositions without settling for something less than God’s best for our lives. For Esau it would have been to strongly deny the temptation to forfeit his birthright, satisfying his hunger with something less than the grandiose enticement put before him. As it relates to sex and sexuality, for any of us, straight or gay, it must mean amplifying meaningful intimate relationships without the sexual overtones. It might mean embracing or at least acknowledging an orientation while not letting certain behavior get the best of us.

Thirdly, it might mean we simply don’t get the bowl of soup. “You mean, I am not allowed to be sexually engaged unless it fits within the one-man/one-woman covenant relationship?” Yes. That is exactly what that means. The only alternative to the marriage covenant between one man and one woman is celibacy, regardless of whether one has a gay orientation or a straight orientation. There are no exceptions to this.

Fourthly, we must distinguish between conditioning and conduct. Esau was conditioned by the fact of his existence and his immediate environment to be hungry. Being conditioned a certain way is not inherently wrong. It is what one does with that conditioning that merits attention, and for him it was to throw good things away to satisfy his hunger. With this in mind, it is notable that the Bible never speaks against homosexual orientation–only those who “practice” consensual homosexual acts (see 1 Corinthians 6:9, for example). This has huge implications for gays and heterosexuals–how we perceive one another and ourselves.

Any sexual practice beyond the scope of one-man/one-woman convenant marriage is sin, whether one is homosexual or heterosexual. Period.

We are exhorted to limit our fellowship with believers who persist in sexual immorality (see 1 Corinthians 5:9-13), whether gay or straight. This may even include family members or friends that we dearly love. The goal, of course, is restoration (see Galatians 6:1-2).

We should welcome all who in their hunger and thirst for righteousness willingly humble themselves before the Lord Jesus (Gal. 6:10).

Quit arguing with gay people about whether or not they were born gay. All of us have real or perceived dispositions to contend with.  The question is whether or not we will fully surrender ourselves to the Lord’s will for our lives.

There is never a place for mistreating or being disrespectful to a homosexual. Or anyone, for that matter. Ever. Doing so is evil.

If heterosexuals have found themselves mistreating or being hateful toward homosexuals, then they must repent. We must remember that Jesus bled for all people. Everyone has worth and dignity.

If homosexuals (and heterosexuals, for that matter) are making sexual choices apart from God’s one-man/one-woman covenant marriage context, then they must repent. God never condemns the orientation, but he is crystal clear regarding his expectations for the unique and powerful gift which is sex.

“Write This Down” is a summary of select teaching moments offered by Pastor Matthew. The preceding summary is from the message “Questions Series: Homosexuality,” the first part of the sermon series “Not Afraid to Ask,” presented on the weekend of August 5, 2012, at Bethel Church.