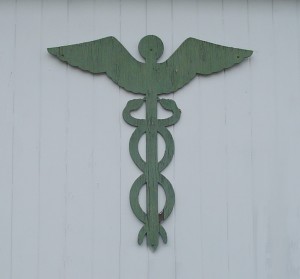 God’s written Word is full of seasoned men and women whose lives are worthy of a hard second glance. Moses rates among the very top of such a list of people.

Numbers 21:4-9 paints for us a stunning picture of an elderly man pouring himself into the next generation, and doing so with an unconditional love and relentless grace that is at once captivating and convicting. To appreciate the drama of it all, one must remember that by the time Moses’ life is revealed in Numbers 21, he is probably between 110 and 115 years old.

The people of Israel, once again, complain bitterly about the difficulty of their circumstances. Specifically, they had been very close to the land of Canaan; all that was really needful was for the little kingdom of Edom to grant them safe passage through their territory. Edom refused, however (see Num. 20:21), and this refusal caused Moses and the Israelites to have to wander back into the wilderness to seek a longer route. Everyone was understandably frustrated, and, in typical fashion, this frustration was taken out on God and on Moses (cp. Num. 21:5). God, weary of the constant complaining, “sent fiery serpents among the people” (Num. 21:6), and these serpents killed many, while still others suffered because of the bites. Ultimately, the people humbled themselves before God and Moses, approached Moses in contrition and fear, and begged him to intervene.

The end of Numbers 21:7 highlights the greatness of Moses: So Moses prayed for the people. And God responded, having Moses erect a bronze serpent on a staff to which the bitten people should look for healing (this bronze serpent was recognized by Jesus in John 3:14-15 as a type for his own pending death and resurrection).

The elderly cynic might offer that Moses pouring himself out with such advocacy and love for that rebellious brood is nice and such, but it is, after all, Moses, and it is not even possible to attain his stature of care, particularly at such a seasoned place in life, what with health issues and dashed dreams and grief and the standard western societal notion that older folks need to simply move to the sidelines. But to see Moses’ generosity for this generation that so often broke his heart as an anomoly is to ignore some of the raw backstory in Moses’ long life. Consider the following.

First, when Moses humbly interceded for the people in Numbers 21 he was a man overwhelmed with deep grief. The text doesn’t spell that out directly, but what is known according to Numbers 20:28 is that Moses’ older brother, close confidant and ministry partner—Aaron—had just died. They had no doubt worked closely together for decades, dealing with the ups and downs of power and position and people in all of their beauty and ugliness. The two of them shared experiences before God that no one else could possibly imagine. Now Aaron was gone.

As if that were not enough, Numbers 20:21 (already referenced earlier) implies an international political and military tension that no doubt caused Moses, the Israelites, and in the eyes of some even God, to lose face. This had to have been humiliating for Moses, and actually sets up the bitter complaining by the Israelites that ultimately prompts Moses to have to intercede for the Israelites before God. The reader should not underestimate the embarrassment of this on both a personal and national scale.

And that follows right on the heels of Moses angrily striking the rock (twice) so that the once-again-whiny people could quench their thirst with the water that would pour forth. Numbers 20:2-13 details a terribly sad story of Moses letting his understandable frustrations get the best of him. By striking the rock he disobeyed God, who had clearly said to “tell the rock . . . to yield its water” (Num. 20:8). His disobedience hurt God’s reputation before the people, and had the effect of elevating Moses to a place only God could occupy (cp. Num. 20:12). The net result of this drama was that Moses forfeited the right to enter the Promised Land. The dream that he no doubt had of seeing the land to which he was leading the people all those decades evaporated before his very eyes. We cannot appreciate the grief this must have been for him.

And yet there is more, for Numbers 20:1 reminds us that Moses’ sister Miriam had died and was buried in the wilderness. This is the one who when Moses was born had helped her mother place the basket in the Nile River, thus sparing Moses’ life (see Exodus 2:7). She was the one who led the congregation of Israelites in worship following their dramatic exodus from Egypt (see Ex. 15:19). Her companionship and counsel was no doubt critical for Moses throughout the many years in the wilderness, even with the moments of tensions that power-partnerships can sometimes create (see Numbers 12:1 and following). I suspect Moses’ heart was broken, and that perhaps this was a major reason he was so particularly raw when the thirsty masses came to him at Meribah.

These things are reviewed to remind us that every leader has a backstory of some kind. And these are reviewed to remind us that we have no reason to believe that Moses is a superhero whose undying love for the Israelites is a step above anything we could offer. We all—and certainly some who are elderly—might be tempted to say that such responsibility is beyond us, and that Moses’ position could not be achieved because our own lives are too packed with pain. Clearly, Moses’ life was too. And yet he still loved to the (bitter) end.

Perhaps this principle, what I call the Moses Principle, will prove helpful: Unconditional love and sacrificing one’s own dignity never grows old. How true this is, and Moses exemplifies this for us. To amplify this principle, consider the following thoughts:

First, our personal backstory is never an excuse to withdraw from relationship, or for mediocrity in our lives. Moses wavered, frankly, with the rock and the staff, and it cost him. But the larger narrative of his life as a leader shows him refusing to let the realities of a raw existence get the best of him. He doesn’t move away from the rebellious generation below him. He moves toward them. Time and again, even though it cost him his dignity.

Secondly, we must remain steadfast as lifelong learners and listeners. Moses’ refusal to properly listen to God, as told in Numbers 20:12, is a reminder to us that we should not live on the fumes of the past and close our ears to new things. Some time prior, in a situation quite similar, Moses had been asked by God to strike a rock that water might come out (see Ex. 17:6). Now God wanted a different approach, but Moses relied on the way it used to be done. We cannot underestimate the power of remaining teachable and open.

Thirdly, we must be available to the younger generations. Something often not understood is that by the time we find Moses in Numbers 20 and 21 he is a rarity. Most of his generation are dead. The great majority of the Israelites under his leadership are forty years old or younger. And though they have a rhythm of whining and entitlement (sometimes similar to today’s younger generations, including my own!), Moses never gave up on them. He valued them. He evidently wanted God’s best for them, and rather than dismiss them he pursued them and advocated for them—time and time and time again. How very Christlike, indeed.