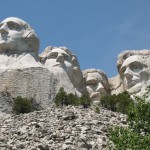 I never thought I’d see it in real life but only in pictures, so when indeed my family and I walked across the courtyard toward the great mountain bearing the images of four of America’s greatest presidents, I couldn’t help but get misty-eyed. Yes . . . even despite the general lack of moral clarity and selfless courage that now seems to dominate America’s political and cultural landscape, I found myself reminded of how deeply grateful I am to be, well, an American.

Christa and our girls and I spent nearly an entire day walking around Mount Rushmore gazing up at the granite faces clinging so strongly to the cliffs. Many things came to our minds, and we spent a goodly part of the day talking about our impressions of the men there portrayed–the purposeful eyes and broadened chest of George Washington; the deep and weary yet determined face of Abraham Lincoln; et cetera. We mused about what other presidents could be worthy of having their faces carved on the mountain. Could Reagan’s? Could Truman’s? Could Obama’s, if for no other reason because he is our first black president, and that in itself is quite a significant feat?

A lot of talk centered on Theodore Roosevelt, who for many years has been a personal favorite of mine, and who, I suspect, is ignored today. His optimism and visionary thinking are refreshing, and, were such things of his talked about more today we might find ourselves with a different national group-think. And his reflections upon leadership are timeless. Consider, for example, the following quote, which I find is exceedingly helpful for my own thinking as a pastor and, therefore, a leader: 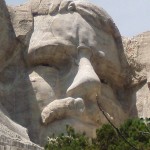 It is not the critic who counts, nor the man who points out how the strong man stumbles or where the doer of deeds could have done better. The credit belongs to the man who is actually in the arena, whose face is marred by dust and sweat and blood, who strives valiantly, who errs and comes up short again and again, because there is no effort without error or shortcoming, but who knows the great enthusiasms, the great devotions, who spends himself for a worthy cause; who, at the best, knows, in the end, the triumph of high achievement, and who, at the worst, if he fails, at least he fails while daring greatly, so that his place shall never be with those cold and timid souls who knew neither victory nor defeat. (Cited by Sharon Jaynes, Building an Effective Women’s Ministry, page 327, from Theodore Roosevelt’s speech entitled “Citizenship in a Republic,” given at the Sorbonne in Paris, France, on April 23, 1910).

The cold and timid souls who knew neither victory nor defeat. Hmmm. That sounds so utterly sad, this middle of the road, no-risk, make-everyone-happy approach to life. It didn’t work in the political or cultural world in which the Roosevelts worked, or, for that matter, the world in which the current lot of politicians work, and it certainly doesn’t work in the world of the Kingdom. Can you imagine Moses caving in to the bitter accusations of the Israelites as they moved through the wilderness, those Israelites who believed life might have actually been better back in Egypt (e.g., Exodus 16:3)? Can you imagine Nehemiah blinking when King Artaxerxes asked him why his face was so downcast (Nehemiah 2:2)? Or Esther declining to appear before the king at the Jewish race’s most critical hour (Esther 5)? Or Paul the Apostle refusing to dust himself off having just been stoned by his opponents, so that he could march right back into the fray (Acts 14:2o)? These are people whose faces are marred by dust and sweat and blood. They chose to stand in the arena regardless of the outcome . . . because it was necessary and, well, right.

Are you that kind of person? Not that your face–and certainly not mine–would ever be etched into granite, but perhaps our faces would be etched into the hearts and souls of those looking hopefully toward real men and women who could stand and lead: among our families, among our friends, within our communities, within our churches, et cetera.