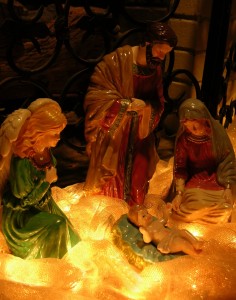 With Christmas looming I can’t help but think, yet again, about the raw humanity of our Lord Jesus. After all, his was not some noble appearing, a supernatural being whose other-worldliness kept him remote from time and space. He was not, as the ancient Gnostics declared, one who only seemed human. Jesus was flesh and blood and bone and hair. He cried and spit up and wet on himself and, undoubtedly, as boys can do, lots of other things.

And he died. Which is why, of course, he was born.

Jesus is the hero that the tattered and sinful soul subconsciously longs for—the ultimate man who, being not from this world, is also Deity. Though not knowing any of this—the unusual birth, the odd life, Jesus’ driving purpose for death, and for that matter, resurrection—the Roman governor Pontius Pilate boldly presented the soon-to-be-crucified Jesus to the Jewish crowds with the words “Ecce Homo!”, meaning, “Behold the Man!” (see John 19:5). The royal servant of Caesar unwittingly introduced the longed-for hero who makes all things new—the one who is fully God and fully man.

And Jesus’ full manhood is vital. After all, only a man can lay claim to what was forfeited by Adam in the Garden of Eden. It was a man who first rebelled. It must be a man who then makes things right. The Apostle Paul rightly declares, “as by the one man’s disobedience (Adam) the many were made sinners, so by the one man’s obedience (Jesus) the many will be made righteous” (Romans 5:19). And with that in mind, only a man deserves to pay the ultimate price for sin, for it was the first man, Adam, who not only first sinned, but cast upon all humanity the notable matter of depravity (cp. Romans 5:12).

Related to this, of course, is the fact that only man, as a created being, and not God, has the capacity to die. In other words, God could not die for sin. It is impossible for him to do that. Were God to die he would violate a non-negotiable reality about his deity, and that is his immutability. This is a major reason that the Apostle Paul would tell us in Philippians 2:8 that Jesus was “found in human form” so as to “die on a cross.”

Moreover, only a man can credibly appreciate our brokenness. It’s not that God cannot choose to be empathetic, but he cannot enter into depravity. And yet God, in the humanity of Jesus Christ, can indeed appreciate such. Hebrews 4:15 declares that we do not have an unsympathetic high priest. Jesus, fully God and fully Man, remaining sinless, nonetheless gets it!

As if those things were not enough, only a man can be our reasonable model for righteousness. We might expect to look to God the Father and perceive as much of his righteousness as our human minds can access. But the reality is that he is and shall always be in a category of holiness that we cannot in this life fathom. And yet, when we see the man who is Jesus Christ, we can more reasonably, more easily, embrace the righteousness that our Father would expect from the redeemed. Being “conformed to the derived image” of Jesus (cp. Romans 8:29) is one of the prevailing goals of the disciple of Christ.

And so it is that at Christmas I can’t help but think of the raw humanity of Jesus—a humanity so utterly necessary so that we can then see God.