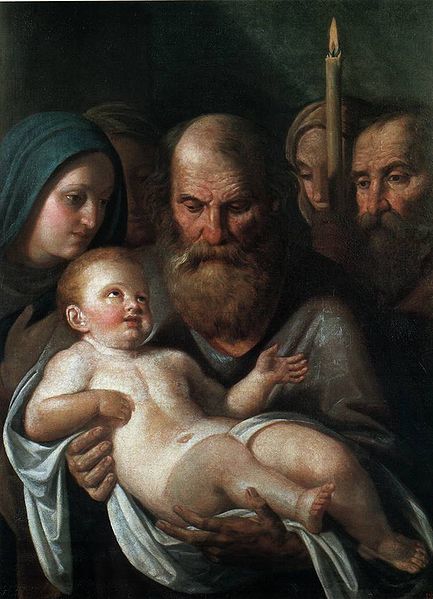 One of the features of any Christmas celebration is the longing many of us have to carry the spirit of Christmas into the many long days and weeks and months that follow. How often is it that we think to ourselves that we want to experience the meaning of Christmas ten days out, or twenty, or forty, or every day? Tucked away in the recesses of Luke 2 is a simple story of one man, a rather unsung hero of God’s Word, who models for us all how to celebrate Christmas when its not Christmas Day. His name is Simeon, and his story is found below, as recorded in Luke 2:22 and following:

And when the time came for their purification according to the Law of Moses, they brought him up to Jerusalem to present him to the Lord (as it is written in the Law of the Lord, “Every male who first opens the womb shall be called holy to the Lord”) and to offer a sacrifice according to what is said in the Law of the Lord, “a pair of turtledoves, or two young pigeons.” Now there was a man in Jerusalem, whose name was Simeon, and this man was righteous and devout, waiting for the consolation of Israel, and the Holy Spirit was upon him. And it had been revealed to him by the Holy Spirit that he would not see death before he had seen the Lord’s Christ. And he came in the Spirit into the temple, and when the parents brought in the child Jesus, to do for him according to the custom of the Law, he took him up in his arms and blessed God and said,
“Lord, now you are letting your servant depart in peace,
according to your word;
for my eyes have seen your salvation
that you have prepared in the presence of all peoples,
a light for revelation to the Gentiles,
and for glory to your people Israel.”
(Luke 2:22-32 ESV)

It should be noted that when Mary and Joseph took the baby Jesus to the Jerusalem temple, “according to the Law of Moses” (Luke 2:22), it was forty days after the birth of Jesus. This was in keeping with the expectations put forward in Leviticus 12 regarding a mother’s season of purification and the expectation that the first born male be dedicated to the Lord when the purification season was completed. Besides the obvious detail that Mary and Joseph chose to be obedient to the Law of God, the context for the story is indeed forty days after Jesus’ birth. It is not Christmas Day, so to speak, and yet the man to whom we are introduced—Simeon—celebrates Jesus’ birth with an enthusiasm and spirit that emulates a little boy gleefully opening presents under the Christmas Tree. For Simeon, it would seem, every day is Christmas Day.

Regarding Simeon’s interaction with the Holy Family there are three important reflections worthy of consideration. The first matter to reflect upon is Simeon’s recognition of Jesus as God’s provision for salvation. It is clear from the text that Simeon had been anticipating the arrival of the Messiah. Indeed, God had communicated to Simeon that he would not see death until his eyes had been cast upon the Anointed One of God. No doubt Simeon awoke each day wondering if that day would be the one in which he would gaze upon the Savior. And then, when the time did come, when the day came for Simeon to hold the baby Jesus in his arms, his anticipation turned into acceptance. The Savior had come, and Simeon received him (in fact, the ancient church referred to Simeon as Theodochus, meaning, “receiver of God”). It is worth pausing here for a moment to ask you if you have received Jesus as your Savior.

The second matter to reflect upon is Simeon’s expression of gratitude for God’s provision of a Savior. The lyrics that begin in Luke 2:29 serve as an ancient hymn of praise. It is probable that Simeon sang or chanted these words while holding Jesus in his arms. In fact, these lyrics make up what is the third hymn of praise offered by people (in contrast to the hymn of praise offered by the angelic hosts in Luke 2:14) in Luke 1-2: the first being Mary’s Magnificat found in Luke 1:46 and following; the second being Zechariah’s Benedictus found in Luke 1:67 and following; and then this one by Simeon, traditionally called the Nunc Dimittis after the first two words of the song as presented in Latin, meaning “now dismiss”. Interestingly, it is not so much the substance of the song that makes it a hymn of praise, as much as the broader context in which it is placed, and the structure. The reason this observation is crucial is it reinforces that for Simeon praise to God was a reflection of his whole being, something from within, something that was part of the structure of his whole life, and particularly his response to God’s provision of the Messiah. His expression of blessing unto God was not contained in mere words, but was the echo of who he was as a man. It is worth pausing here for a moment to ask you if your life is marked by such natural and overflowing praise.

The third matter to reflect upon is Simeon’s determination to proclaim to others God’s provision of a Savior. It cannot be missed that Simeon is offering this hymn of praise within the Jerusalem temple, amidst the common crowd of temple-goers, with baby in hand and Mary and Joseph standing close by. His is not some weirdly private religious moment, but a moment of proclamation. And to add strength to this important fact Simeon boldly acknowledges that God’s provision of a Savior is not just for some narrow religious elite, but for “all peoples” (Luke 2:31). With just a few modest words Simeon makes plain that Jesus is “a light for revelation to the Gentiles, and for glory to your people Israel” (Luke 2:32). Gentiles and Jews—Jesus is available for all. Indeed, it is interesting to note that the whole of Luke 2 has a global perspective. It begins with a census commissioned by the Gentile world’s single greatest king, Caesar Augustus (Luke 2:1), includes a reference to the Jewish world’s single greatest king, King David (see Luke 2:4 and the notation about Bethlehem), and covers a swath of humanity ranging from rough-hewn shepherds watching their flocks by night to sophisticated and decorated governors of important provinces. Jesus is for all peoples, and Simeon cannot help but make this fact known.

What a comprehensive response to God’s provision of a Savior: utter recognition that Jesus has come, praise for this special provision, and a willingness to tell the story so that a watching and needy world may participate. In offereing his Christmas Prayer, Simeon models for you and me the reality that Christmas may be celebrated not just once a year, but every day.